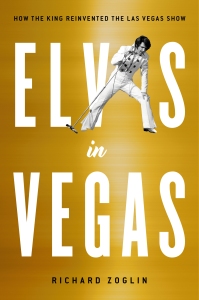 Elvis in Vegas: How the King Reinvented the Las Vegas Show (Simon & Schuster, 2019)

Elvis Presley’s comeback engagement in Las Vegas, in August 1969, was his first time back on a live stage in more than eight years. His career had gone sour—bad movies, and mediocre pop songs that no longer made the charts—and most critics had dismissed him as over the hill. But his Vegas show was a spectacular success, drawing rave reviews and more people for his four-week engagement than any other show in Las Vegas history. The show not only revitalized Elvis’s career; it changed the face of Vegas entertainment for good. His show was the culmination of Vegas’s 1960s golden age, when Sinatra and the Rat Pack helped to make Las Vegas the hottest live-entertainment center in America. But Elvis’s show was something new; not an intimate, Sinatra-style night-club show, but an over-the-top, rock-concert-style extravaganza in the city’s largest showroom. Elvis set a new bar for Vegas performers; the biggest salary, the biggest musical production, and the biggest promotion campaign the city had ever seen. What’s more, he brought a new audience to Vegas — not the well-heeled high-rollers who came to see Sinatra and friends, but a mass audience from Middle America that Vegas depends on for its success to this day.

“A smart and zippy account of the watershed moment when the King of Rock ‘n’ Roll came to Sin City to reclaim his squandered talent… Zoglin is in his element.” — The Wall Street Journal

“[A] fascinating tale of how the king got his groove back and Las Vegas refreshed its own image… Blending new interviews with top-drawer research focusing on how Las Vegas evolved as the pleasure capital, Zoglin produces a gem of pop culture history.” —Associated Press

“Zoglin’s smart and entertaining book… combines genuine affection for its subject with a keen sense of show-biz history and a lively style.” — Newsday

“Fascinating entertainment history… Elvis fans will enjoy this richly sourced look at one of the most consequential performances of his career and his lasting legacy in the city that hosted him.” — Publishers Weekly

“Zoglin perfectly captures a seismic moment in 1969 when Elvis tore the roof off the International Hotel and ended the reign of the Rat Pack. This is the story of a spectacular head-on collision.” — Conan O’Brien

With his topical jokes and his all-American, brash-but-cowardly screen character, Bob Hope was the only entertainer to achieve top-rated success in every major mass-entertainment medium of the century, from vaudeville in the 1920s all the way to television in the 1950s, 1960s, and 1970s. He virtually invented modern stand-up comedy. Above all, he helped redefine the very notion of what it means to be a star: a savvy businessman, an enterprising builder of his own brand, and a public-spirited entertainer whose Christmas military tours and unflagging work for charity set the standard for public service in Hollywood. Richard Zoglin has written the first definitive biography of Bob Hope, which makes the persuasive case that he was the most important entertainer of the twentieth century.

“Terrific—scrupulously researched, likely definitive, and as entertaining and as important (to an understanding of 20th- and 21st-century pop culture) as its subject once genuinely was.” —Vanity Fair

“This beautifully written volume is, at last, the book about Bob Hope. Zoglin covers everything: the early life, the sky-rocketing triumphs in every medium, the life-risking—and ego-feeding—patriotism that spanned the globe, bringing laughter (and gorgeous ladies) to our troops in wartime, the wealth, the women, the quirks, the warts, the temper, the cheapness, the touching generosity, the fabulous talent and the genius-managed career.” —Dick Cavett

“A wonderful biography by Richard Zoglin. For me it’s a feast.” —Woody Allen

“Richard Zoglin’s biography Hope does such an effective job of arguing the appeal that even the Hope-hater comes away eager to see more of his good early work, and more sympathetic to the forces in his life and in the country’s which left him hard to like at the end.” —Adam Gopnik, The New Yorker 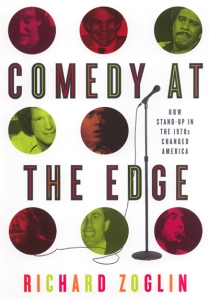 I have been thinking and writing about theater for TIME for the past 20 years. Here are some of my current thoughts about shows, trends and other things that inspire me, in the theater and beyond.